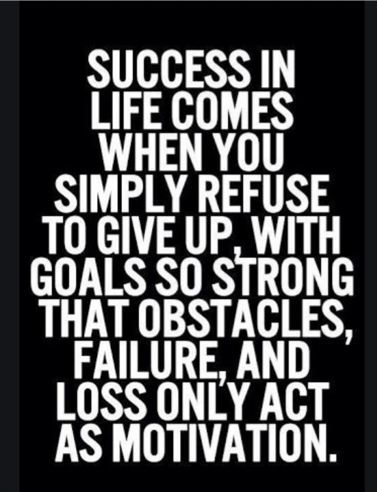 Ask yourself a key question:  “Am I a renter in my life or an OWNER?”

“Will I forever be mediocre – getting by – regretting a past life of quitting things?  Will I let my circumstances control me?  Or, will I own my future – will I control it?  Will I reach my goals?”

“Will I be standing in lines the rest of my life or will I achieve goals where I can go to the front of those lines?  Will my life’s bouncers pull the ropes aside and say, ‘Welcome, sir. Your table is waiting.’”?

When we choose to win – to get to our goals no matter the difficulty – we pay homage to our future, and we honor the person we want to become.

Take the goal of learning to fly an airplane.  We see people in our office every week who are trying to get back to that goal.  They quit a few months or years ago.  Quitting was a bitter pill to swallow and they now want to end that failure…. To complete that effort they started.

A high need for completion is a key ingredient in reaching any goal.

One of the foibles of many human beings is the inability to maintain the determination to reach their goals – IE to build in themselves a high need for completion, to get to those mountain tops.   A pilot, like many other successful people, is a person who can apply him/herself.  They are people who can focus on the tasks and can deploy sufficient effort to complete the lessons.  The successful ones can be called “stubborn” on the issue of completion – on reaching goals.  They simply cannot allow themselves to waste more time not getting started or to throw away 20, 30, or 40 hours in lessons only to fail to finish their dream to learn to fly a plane…. Or to reach the next license.  It’s just not in their nature.

Where did they get it – how did they foster it?

DEFINING THE PROBLEM:  Why do some people fail to get to their goals?

Some people find it difficult to know where to start.  The list of sub-tasks can appear overwhelming.

Others find it too difficult to continue to make the effort until the job is done.  They can get caught up on a growing list of excuses why the goal was not, after- all, a “good goal”.

So, it comes down to individual effort.   Some of us can be our own worst enemy in achieving goals.  We allow ourselves to obsess about the obstacles we encounter or on difficulties unforeseen or on one stubborn subtask that we need to complete in order to make progress toward the goal.

Start where you are

Use what you have

Do what you can &

Those that set goals and achieve them are the ones that don’t care what is in the way – the work required, how long it may take, the length of the list of tasks to be done, or the possible setbacks.  Through it all, they keep their eye on the goal…. and properly value the goal along the way.

How does anyone keep the faith to reach a goal?  Diligence?  Persistence?  Will power?  Tenacity?

In the hundreds – thousands – of employees that I have had, I’ve noticed a few common traits in the successful goal achievers.  They are worth listing so that we may copy the habits of winners.

#1: Those who attain their goals want the goal more than they might not want the effort involved to get there.  The effort – to the achievers – is a small price to pay to get to the goal.

The ones who often fail allow the needed effort to grow in their mind to the point of killing whatever will they brought to the field of play.  As a consequence, the importance of the goal soon can fade in comparison.  Or, their minds wander off in another direction – often looking for an easier goal to pursue.  Any difficulty is – well – “difficult”.  Their common expression becomes, “This is HARD.”   Then, “hard” becomes “too hard” and finally…… “impossible”.  They can reach a tipping point and quit trying.  They then blame the teacher, their circumstances, or the goal itself – but never themselves.

Successful achievers most often don’t waste time on blaming anyone or anything.  They just persist.  They realize some very important things:

(a) success is all about their own effort and

(b) failing to get to a worthwhile goal always makes it easier to fail on the next goal also.

So, if the required effort gets bigger than was expected, the importance of the goal also grows – and their effort with it.  They have a unique definition of the word “worthwhile”.  “Worthwhile” means: “where my effort expands in response to match any difficulty encountered”.

So, for the true achievers, if the required effort grows, the value of the goal grows even more in their minds.  Failure is truly not an option.  They know the inner rewards of success and the aftertaste of failure and cannot accept the bitterness of the latter.

#2: For some achievers, they learned good habits about achieving goals at an earlier age.  They bring a full toolbox to the challenges.

As a child, they may have started to put a puzzle together or sewing a quilt thinking it would be easy.  But, they then found that staying with it until it was done was much tougher.  For them, however, that rush of satisfaction they felt upon finishing what they started fed them. They also felt their self-esteem grow as a result.  They also learned that the effort required seemed tiny in retrospect.  They then became more prone to finding harder puzzles to defeat, higher mountains to climb.  They learned that the bigger the challenge, the stronger was that rush of satisfaction, and the more their confidence and self-esteem grew.

They were on their way to seeing the value in bigger challenges and that winning and losing were just habits….. and winning habits could be developed over time.

“We are what we repeatedly do. Excellence, therefore, is not a single act; it’s not a skill. Excellence is a habit.”

#3: For most of them, they realized that eye- on-the-prize was not enough. They needed to then put in the work.

No goal worth our time is a goal that just anyone could do.  So, tough goals – requiring great effort – are sought out by true achievers.  The world doesn’t put great goals in candy dispenser machines requiring only a quarter.  To a true winner, only tough goals are worthwhile and the toughness only makes the goal more valuable.  The higher the value – the more that the effort required is seen as reasonable, even inconsequential.

My brother started his own software consulting company with one employee – himself.  One client was a large hotel in Marina Del Rey, Calif. He would go there and stay in the hotel for several days at a time servicing them. One night he was eating dinner in the hotel restaurant. An accounting clerk approached him and said, “You’re that computer guy – I pay your bills. Do you really get paid $120 per hour? How do I get paid $120 per hour?”

My brother said, “Well, it starts in high school….” And he went on to explain all the steps he took to get where he was. Finally, he said, “— and then clients pay you $120 per hour.”

She had her eye on the goal – but to the exclusion of all the things necessary to get there. She heard the prerequisites to success and it sounded like “too much work”. She didn’t value the goal high enough. The effort was, to her, too high a price.

Success in reaching goals comes after you hit a tipping point and begin to desire your goal more – and the burden of obstacles gets lighter and lighter. They know that surge of ambition as a goal comes within sight – some call it “getting a second wind”. That feeling is all mental – it is the perceived effort fading to zero. Winners know that second wind feeling and so dismiss any thought of quitting.

Some people think of it this way: “What does this goal mean to me?”

Some will answer, “Well, I’d like to reach it. That would be cool.”

But, some will answer, “Everything!! I will not fail. Period.”

Assigning high value to goals is critical to winning. When the goal has limited value to you, the laziness- demon will hunt you down and devour you. Then, failure and quitting quickly follow and become habits because goals in general will come to have less and less value. In fact, the bias will be to dislike those who do reach goals. “Bosses” will become “those who kissed ass” or “knew somebody”.

If you want to climb a mountain or finish a marathon or get your commercial pilot license – you do it because it is a great challenge – because you want to be in that rarified air where few have ever gone.

Any mountain climber will tell you, “I do it because it is tough to do. Why do things that require little skill?  I maintain my effort until I have got to the top because, I won’t respect myself if I quit.”

Goals both require – and extend – one’s self worth.

Self-respect is a great motivator.

Goals are peculiar things – the most valuable ones are those that come with the greatest benefits but…… they are most often those with great mountains that must be climbed to get to them.  The great goals – the ones that you will remember when you are 85-years- old, rocking in that rocking chair on the porch – are the ones on top of those high peaks where few have ever gone.

There is a link between self-esteem and goal orientation, but it is unclear which is the cause and which is the effect.

Goal achievers have high self-esteem. But, self- esteem is also built by achieving goals. So, which causes which?

Goal achievers seem to have built self-esteem in themselves through many smaller goals and wins in their past. Even learning to tie their shoelaces at age 2 or 3 may have been a part of that. They know from small experiences that no obstacle can keep them from winning – not forever. It may take some time but it will be attained. Why? Because reaching goals has become a habit for them – and they fear that quitting can also.

And, one more thing:   Successful finish-line people also come to see that flexibility and creativity were also important to reaching goals.  No football halfback ever took a straight line to the goal – he had to swerve and pivot, sometimes reversing his direction, sometimes taking a step back in order to move ahead.

“If a PLAN doesn’t work, change the plan, but never the GOAL.”

“I never tried quitting, because I never quit trying.”
— Anonymous

THE JOY OF FLYING

The Zen of Landing